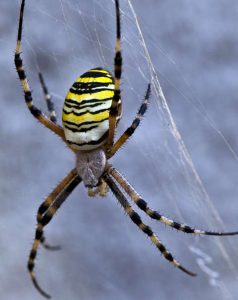 Orb-weaving spiders produce the familiar flat, ornate, circular webs usually associated with spiders. Orbweavers come in many shapes and sizes, but the brightly colored garden orbweavers, Argiope, are the largest and best-known. The yellow garden spider, Argiope aurantia, is marked with yellow, black, orange or silver. The female body is more than 1 inch long with much longer legs. It is also known as the black and yellow garden spider and sometimes the writing spider because of a thickened interwoven section in the web’s center. Male Argiope, often less than 1/4 the size of females, can sometimes be found in the same web with the female.